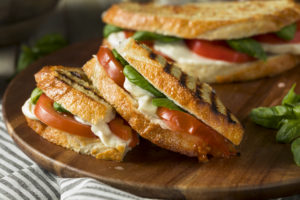 Did you know that Monday, August 23rd, is National Cuban Sandwich Day?

What Makes a Sandwich Authentically “Cuban?”

Cuban sandwiches include a variety of hams and cheeses. These sandwiches originated in cafes that catered to Cuban workers in Tampa and Key West Florida. Later, these types of sandwiches migrated to Miami. Cuban sandwiches usually consist of ham, roasted pork, Swiss cheese, pickles, mustard, and sometimes Salami put on Cuban bread.

Sandwich lovers often debate on what makes a Cuban sandwich authentic. There are many variations, and all of them are delightful. The loaf of Cuban bread, typically between 8-12 inches, is cut in half and has olive oil on its crust. A coat of yellow mustard goes on the bread, and the meats are layered. Once the sandwich comes together, a double-sided plancha (flat-top grill) or panini press compresses the sandwich and allows the cheese to melt.

At Giolitti Deli, We Offer a Cuban Panini

You don’t have to travel to Florida to fulfill your Panini taste palette. Our house favorite Cuban Panini is $9.95 and includes roasted pork, ham, swiss, pickles, and special Cuban dressing on grilled Tuscan bread. When you purchase a sandwich from Giolitti Deli, you can look forward to eating real food that isn’t processed. Giolitti Deli has a fresh-food guarantee because we make all of our food from scratch, and there are no msg or preservatives. You can pair your Cuban sandwich with one of our delicious soups and salads for a fulfilling meal.

This entry was posted on Friday, August 20th, 2021 at 8:07 pm and is filed under Blog . You can follow any responses to this entry through the RSS 2.0 feed. Both comments and pings are currently closed.