The Slow Food Movement: Its Origins and Goals 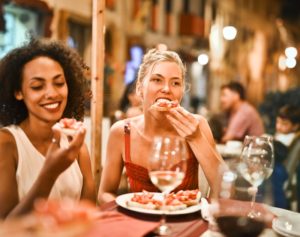 Relish the slow food pleasures of flavor and company during your next visit to Giolitti Deli.

The Slow Food Movement, originating in Italy, calls for a celebration of food that is locally grown, made to nourish the body, and which is appreciated when eaten. The Slow Food movement began in the 1980s as a protest and has become an international phenomenon for food lovers everywhere. Read on to discover the surprising origins and central tenants of the Slow Food Movement.

In 1986, the first McDonald’s in Italy was set to open by the Spanish Steps in Rome. The Steps, built in the 18th century, are a beautiful centerpiece and attraction for the city. Many Italians planned to protest the insertion of a fast food restaurant into one of their most beautiful, classic national landmarks. One man, journalist Carlo Petrini, thought that merely carrying protest signs was not enough. He and a few friends joined the protesters with bowls of penne pasta instead, which they handed out to passersby. Why pasta? Petrini and his cohorts shouted, “we don’t want fast food…we want slow food!” They chose lovingly made Italian pasta as the symbolic opposite of mass-produced, blandly-tasting fast food that was infringing on their country.

Although their protest was not enough to stop the McDonald’s behemoth, Carlo Petrini’s Slow Food Movement took off. Three years after that first protest, Petrini and representatives from 15 countries met in Paris to sign the Slow Food Manifesto, which is a total rejection of what they call “Fast Life.” Fast Life is a life lived to mimic the machines, “enslaved by speed” as the Manifesto states. Petrini and his co-signers are against the influence of the “Fast Life” in every part of our lives. They believe the best way to begin your defense against Fast Life is at the table with the appreciation and pleasure that can come with a “slow meal.”

A Return to the Family Kitchen

The Slow Food Movement’s mission is to reveal to us how we can take the time to enjoy the pleasure of making and eating food. It also wants to remind us how essential food is to the pursuit of a happy, satisfying life. The movement’s followers strongly dislike the way fast food is made and eaten in a hurry, without a care for pleasurable factors like flavor, texture, and presentation. The movement wants to resurrect the kitchen and dinner table as hubs of conversation, pleasure, culture, and community.

Carlo Petrini wants the extinction of domesticated plants and animals to receive the same attention dedicated to endangered wild species, like the panda or tiger. Over a century ago, people ate between 100 and 120 different species of food, and now most diets are made up of 10 to 12 species. This not only leads to a less interesting selection of flavors, but puts an immense pressure on the domestication and harvesting of those 10 to 12 species.

An element of the Slow Food movement is recognizing the importance of preserving a region’s unique cuisine, along with the specific food plants, seeds, domestic animals, and farming methods of that region. A key tenant of the movement focuses on eating locally and using fresh products, instead of eating at commercially mass-produced fast food restaurants. Fast food options taste the same throughout the world and do not support small, diversified farms.

Today there are over 150,000 professed members of the movement throughout 160 countries. The United States has 170 local chapters dedicated to the cause. In 2004, Carlo Petrini opened the University of Gastronomic Sciences in Pollenzo in Piedmont, Italy, where people can study artisanal and industrial food production.

Giolitti Deli aims to follow the goals of the Slow Food movement, crafting fresh, flavorful meals from equally fresh ingredients. At Giolitti Deli, we make almost all of our products from scratch, and nothing is brought in prepared. Our commitment to freshness means we make our delicious staples ourselves. Our Tuscan bread, Rosemary Focaccia, Tuscan rolls, lasagna, mozzarella, sauces, manicotti, canneloni, and tiramisu are just a few items made on site. We don’t use preservatives or MSG, and we make sure to use the very best ingredients that we can.

The best Italian dining goes hand-in-hand with Slow Food. Italian cuisine demands love and attention in the making of it, and community and conversation during the eating of it. Giolitti Deli offers a wide array of fresh foods to appreciate and savor over a long lunch or dinner with friends and family.

This entry was posted on Tuesday, October 8th, 2019 at 6:48 pm and is filed under Italian . You can follow any responses to this entry through the RSS 2.0 feed. Both comments and pings are currently closed.