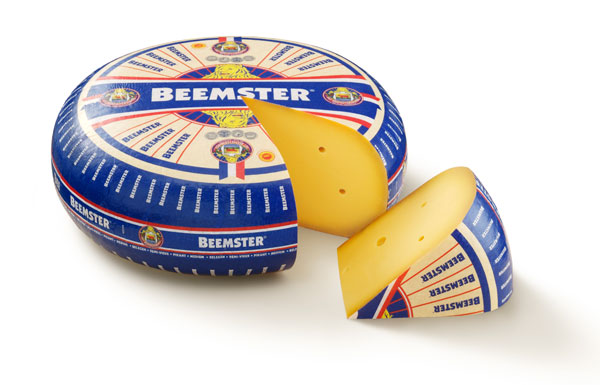 Learn about our featured cheese of the week: Beemster cheese!

This week’s featured cheese from Giolitti Deli is Beemster cheese! It is a North Holland Dutch Gouda that is crafted exclusively in a single region in Holland, the Beemster Polder. This type of cheese is another great charcuterie addition, and we are offering it in our store for $16.99/lb. Continue reading to learn more about Beemster cheese and what food and drinks to pair it with!

Beemster cheese is a very special type of Gouda, as it is crafted exclusively in the Beemster Polder- a low tract of land enclosed by embankments with no connection to outside water sources. The cows graze this area in North Holland on pesticide-free pastures that contain rare blue sea clay that gives Beemster cheeses a soft and creamy texture.

Beemsite Lite is only aged for five months, so it doesn’t have much complexity, so it has a mild taste that pairs well on a sandwich.

The Classic cheese is aged for a minimum of 18 months on traditional wooden boards, so it has a much more complex flavor. The unique sea clay soil of the North Holland region gives the cow’s milk a sweet flavor and soft consistency.

Beemster Master’s Choice gets an extra washing of curds and gets at least one year of aging. This type is softer and creamier due to extra washing, and each wheel is selected by the Master Cheesemaker.

Beemster X-O is a very old cheese that ages for a long 26 months. The flavor has hints of butterscotch, along with waves of whiskey and pecan. As the cheese matures for over two years, the flavors become very complex, and the cheese becomes crumbly, but still has a smooth and creamy taste.

At Giolitti Deli, we sell the Beemster Classic cheese that has been aged for at least 18 months. This type of cheese pairs well on a charcuterie board with smoked almonds, dates, or a fig spread. As for drinks, serve the Beemster Classic will a glass of hoppy, bitter craft beer, a bottle of Malbec, or your choice of a full-bodied white wine.

This entry was posted on Wednesday, May 15th, 2019 at 8:40 pm and is filed under Food . You can follow any responses to this entry through the RSS 2.0 feed. Both comments and pings are currently closed.