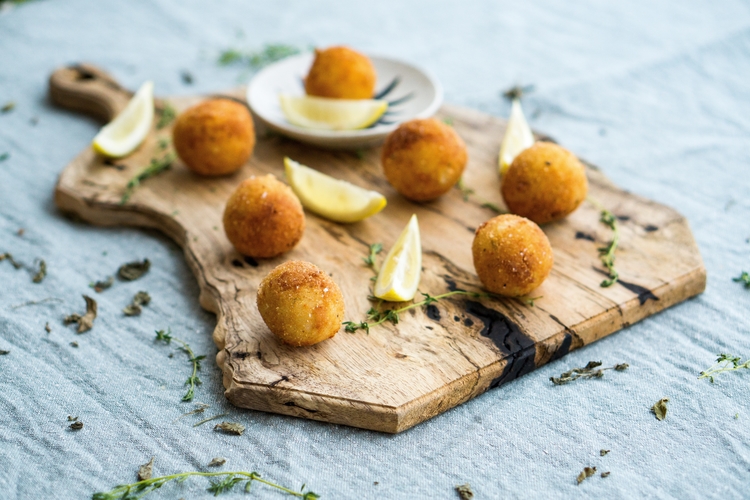 Learn about arancini and suppli, the famous Italian rice balls!

Arancini and Suppli are very popular fried rice balls that can be found in bars, restaurants, and market stalls around Italy. They are both are breaded, deep fried, and served with a side of marinara, but they also have a few major differences. Continue reading to learn more about the delicious Italian rice balls, then come into Giolitti Deli to purchase them for $3.95/each!

There are two main recipes of the fried rice balls: the Roman suppli, and the Sicilian arancino. The main difference between the fried rice balls is that suppli are made with arborio rice and mozzarella, while arancini are made with arborio rice, mozzarella, and the addition of beef and peas. The Sicilian arancino is typically larger and has a conical or circular shape, which is fitting as its name translates to “small orange.” While beef and peas are the most common fillings, you may find other vegetables inside arancini such as mushrooms or eggplant. You can even find specialty arancini like carbonara, but traditionalists aren’t usually fans of the new creations.

Suppli are a Roman specialty and are often served in pizzerias as antipasti. They come in an oblong shape, and traditionally only contain arborio rice, tomato sauce, and a large piece of mozzarella in the middle.

The history of arancini in Sicily is thought to have started with the Arabs in the IX century, as Arabs would eat small portions of rice by making small balls with their hands and add in lamb meat. The shape was similar to a small orange, so they fittingly named it arancino.

The history of suppli is mixed with the history of the city of Rome. The name “suppli” comes from the French word “surprise,” which is attributed to the period when Rome was occupied and dominated by Napoleon and his army. It is said that the French were surprised by the mozzarella cheese hidden inside the suppli, and so the name stuck. While they are now made with beef or a bolognese sauce, the original suppli were made with chicken heart, lung, and liver. Romans are now very proud of their delicacy, as they are believed to be one of Rome’s first “street foods,” as they were often sold by vendors on street corners. Today, you can find suppli in pizzerias and restaurants all over Rome!

Team members who also make the business possible include Manager Kathy Hunter, Manager and Catering Director Cheryl Molesky, Head Baker Porfirio Diaz, Chef Alfredo Escobar, and Deli Manager Noe Merino. To contact us, please visit our contact pageor give us a call at 410.266.8600. Also, be sure to keep up with us on Facebook, Twitter, LinkedIn, and our blog!

This entry was posted on Wednesday, February 20th, 2019 at 4:37 pm and is filed under Italian . You can follow any responses to this entry through the RSS 2.0 feed. Both comments and pings are currently closed.